The task was to create a micro world in the given area by populating it with a number of elements which could be a mixture of 3D and 2D structures and experiences. 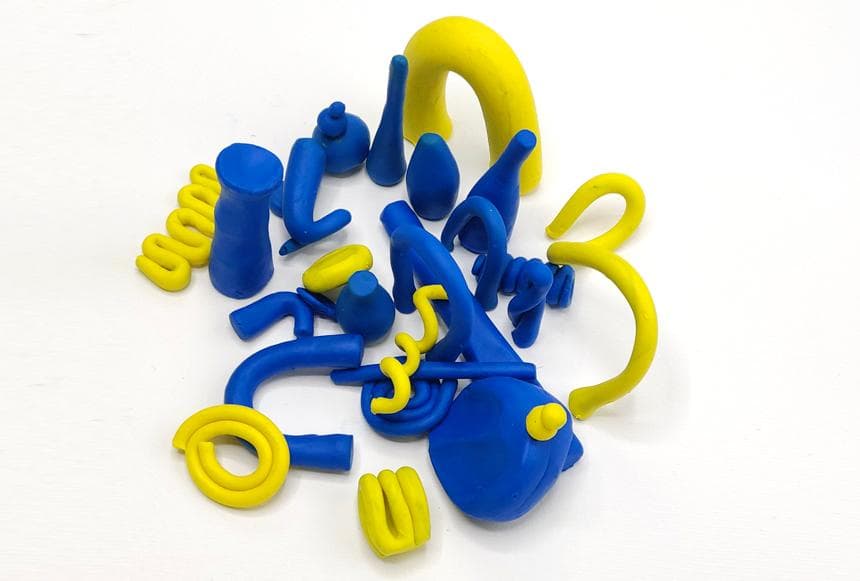 Speculative, Design2019
Design ResponseSince the times we know humans existed, there have always been an upgrade or an evolution of everything around us, including weather, environment, architecture, biology, geography, etc. When it comes to us humans, innovation, alteration, evolution and growth of the systems and objects have never stopped ever since we came into existence. With this in consideration, various systems and cultures in the anthropocentric world are going back and forth in the present to make way for the future. These systems in themselves influence various changes in society and the general ways of living. With time, the usage of resources is changing; which is leading the humans to redefine their lifestyles. ‘Objectile Morphism’ hints towards the way humans will live a life in the near future. One of the subsystems is the object culture of tomorrow, which will influence a wide range of areas including economies, biodiversity and politics. The focus of the project is on the way the anthropocene is being transformed and the modern cultures are taking over the traditional routes designed in different cultures over the years. This present day scenario gives rise to enquiries about the coming age issues which will be a result of the chain reactions taking place in the present systems. The project of creating a micro world was in itself a speculative experiment which paved the path for numerous explorations relating to graphic language, shaping of content, interaction, including senses (taste, smell, sound, touch), material selection, etc. It was a driver in speeding up the process of designing and incorporating material making and research thoughtfully into the work. Since there was a freedom of using any material and intervening with the time and scale of the subject, it was possible to mould the context of the project with a futuristic vision of post materiality and object design relating to void-cultures.
Item 1 of 4
The name ‘Objectile Morphism’ is derived from the words Object – Tactile – Morphing. Being far from possible reality, this world is culturally void, redefining the material aspect of the objects and amplifying the need of using technology in every action that is carried out. The touchpoints of this experiment were to define the evolving elements which are going to influence the future cultures. It was necessary to build a visual language which communicates the non cultural aspect of the world. The objects, evolved from 2D paper sculptures to 3D clay models denote the visual grammar which resonates with the futuristic idea of evolution of cultures around the world. This experiment was an answer to various questions like – How will the cultures morph with mankind? What will the foundation of object architecture in that world be like?
Item 1 of 2
The paper sculptures evolved to become solid 3D objects which further morph with each other enabling visualisation of the changing systems through various combinations and permutations of the future objects. With multiple layers of object design, futurism and graphic design to the context, it became the holistic model for future systems. The experience of handling the future objects was designed with a sensorily sensitive approach. A few key guidelines were set before starting with the making of ‘Objectile Morphism’. The time frame is speculative and relates to post materialism. This micro world is for the inhabitants of other digital realities who come back to the real world eventually at the end of the day. The visual language is very minimal and clean in terms of color and forms. It seems familiar, but at the same time carries the mood of emptiness and isolation. The audience were able to immerse in the micro world through the sense of touch and get insights about the systems of the coming age. The anthropologically designed objects were simple forms in yellow and blue denoting the elements of a neo-non culture.
Item 1 of 6